Also available as a book

Get a free review copy or

In most cases Repetitive Strain Injury is caused by physical overload, but it can also have a psychological background. Currently known are the following primary causes:

2) Psychosomatic causes
a) Tension Myositis Syndrome
b) Fear of RSI

The first time pain often occurs in very stressful situations. However, this stress is often only the trigger, not the cause. The longer the symptoms persist, the more psychological aspects play a role: fear of the future, fear of having to quit your current work, fear of never returning to a 100% healthy state. It does not matter if the primary cause is physical or psychological, after a few painful months these fears play a significant role.

Both causes result in limited blood flow whether due to tense and overstretched muscles (physical cause) or directly controlled by the central nervous system (psychosomatic cause). The reduced blood flow means an insufficient supply of oxygen and a lack of removal of waste products.

There are some forms of RSI that can be operated on. These are, for example, the ulnar nerve entrapment and carpal tunnel syndrome. These nerve compression symptoms may trigger the pain, but with computer users they are usually not the culprit. In particular the carpal tunnel syndrome (CTS) is too quickly diagnosed by some doctors. This is understandable, because surgery is possible and an apparent solution is found. But even in cases where the CTS diagnosis is correct and surgical intervention brings short-term relief, the pain often comes back after some time because the underlying causes (poor posture, stress, etc.) have not been addressed. If your doctor recommends surgery, you should obtain a second opinion. You should have exhausted all non-invasive options before being operated upon.

In the section below you will find more information about those three primary causes. I have created a diagram for each part illustrating a possible injury progression. Of course the scaling of the x-axis (January to December) is different for each person. In my case I would have to more than double the length, however most fellow sufferers have to halve the length. If your pain occurred only temporarily so far, it might already vanish by next week. The three causes do not always occur on an isolated basis, they can be mixed.
The straight progression of the green line of pain is a little misleading: A continuous improvement should occur over time, however it probably will not be that straightforward. It may happen that you feel really bad on one day and painless the next day. In general it can be said (which was confirmed to me by fellow sufferers) that initially the pain-free intervals become longer and the pain intensity subsides only slowly over time.

As described on the page What is RSI?, a repetitive motion is the leading cause of RSI. Minimal tissue damage is usually repaired during rest periods (e.g. overnight). But if those rest periods are too short or the strain is too high, those small tissue damages add up until eventually a level is reached where your forearms start to ache.

"But I'm only moving my fingers, that's not exhausting?!" Well, it is. Thousands of repetitions do affect muscles, tendons, nerves and joints, even if the pain only becomes apparent after some time.

During a regular working day emails, reports, notes, etc. add up quickly to the amount of roughly four written A4 pages. With an average of 3,800 characters per page you move your fingers about 15,200 times. If you also consider text corrections and mouse clicks, a number of 20,000 adds up easily. Including private computer use in the evening, you have moved your fingers 25,000 times on a single day.
Compare that with a marathon: it takes about 50,000 steps. Do you think that it is healthy to run a half-marathon every day? And not just for a few weeks, but years or even decades? The long-term wear is obvious.
The load is distributed on more than two fingers when working on the computer, but the relatively small muscles in the forearm are also much less durable than leg muscles. In addition, office work usually takes place in an absolutely non-ergonomic position, so that the lack of oxygen supply is another negative factor.

In my case the years of extreme strain were also the cause of my pain. This most commonly encountered form of repetitive strain injury is also discussed extensively in this website.

Usually the first pain occurs after long, stressful work phases. If these warning signs are ignored for weeks, then the pain intensifies, occurs regularly and is often noticeable well into the evening. If you then still do not change your working attitude, posture and take regular breaks, the pain can become chronic and will not disappear completely even after longer periods of rest (e.g. vacation). The longer you ignore the pain and take no action, the more protracted will the recovery process become.

In the diagram you can see that the physical strain can be continuously reduced with frequent breaks, stretching etc. However, if you have ignored the first warning signs over a longer period (e.g. temporary mild pain in the wrist), then the healing might already take several months. The longer you feel the pain, the more you will doubt the healing ability of your body (which unquestionably exists!). Due to that fact, all sufferers should also have a look at the special psyche section.

A frequent question is: "Why weren't these problems as widespread in the past (in the age of typewriters)?" The reasons are simple: lower typing speed, forced breaks when changing pages and after pressing the carriage return button and of course, there were much less people engaged in typing back then. Today there is almost no profession without office work.

RSI is not always a consequence of mere physical overload. As explained in the previous section, in most cases the psyche also plays a role (albeit minor). However, it can also be the main cause for some people! Some sufferers would normally stop reading now: "My pain is real, I am not imagining it!" Of course, your pain is real, but it may not be based on small tissue damage. The brain has the possibility to control the blood flow (and hence the supply of oxygen), so the pain might arise in some parts of the body. With this pain the brain tries to distract you from bad experiences / feelings or stress in the subconscious mind. Some examples are death of a family member / friend, divorce, problems with work colleagues / friends, illness of a family member / friend, new boss, debt. But also really positive changes in life can subconsciously trigger severe stress: moving, marriage, birth of a child etc.

Dr. John Sarno has researched this phenomenon for several decades and has given it the name Tension Myositis Syndrome (TMS). It might not only be the cause of pain in the arm, but can also affect the entire body. Among professionals, particularly traditional doctors and orthopedics, this theory is very controversial. However, in his book The Mind Body Prescription Dr. Sarno refers to his high success rate of several thousand patients and various success stories confirm his theory.

"How do I know that I am affected by TMS?" This question is not easy to answer because the stress is subconscious and not always easy to pinpoint. If you work on the computer (or do comparable RSI-risk activities) for significantly less than half of your working hours or you only recently started to work intensively on the computer (1-2 years), then you should consider TMS as a possible cause for your pain. Even if you do not believe that you are affected by TMS you should check out the information on the psyche page (other complaints such as back pain or headaches and even depression can be also triggered by TMS).

In the diagram below you can see that with a "classic" Tension Myositis Syndrome the physical overload only plays a subordinate role. In addition, the longer you do not address your suppressed emotions, the more likely it is that you develop fears of the future. 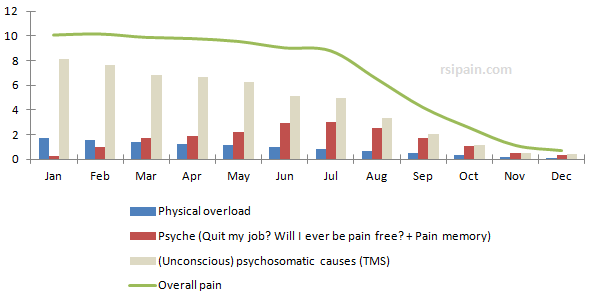 A colleague has been on sick leave with severe pain in both forearms for several weeks? Your company gives a training session on "healthy working" and you realize that you have had poor posture for the last couple of years? You work six hours a day or more on the PC? You have read my medical history? You work overtime to finish an important project?

The mere fear of RSI can paradoxically trigger RSI. If you think about the possible dire consequences of your work all the time, you almost automatically tense up and will not move naturally. As a result the blood flow deteriorates and you feel pain - a self-fulfilling prophecy.

Have a look at the appropriate section on the psyche page, no one needs to develop repetitive strain injury! 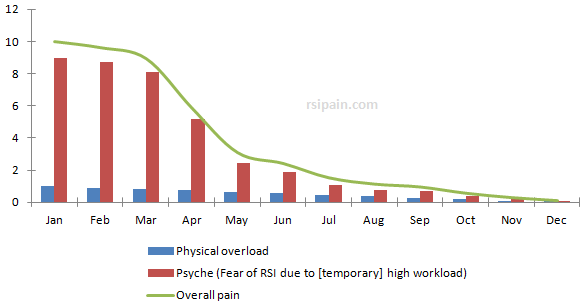 The content of this website is also available as a printed book! Get a free review copy or order: